Yes, the heron has returned.

I surprised the heron last night–or it surprised me, or neither surprised either, depending on how one perceives it. But the heron  was at the fish pond and the fish went into hiding again.

I’m hoping the problem was that i had moved both scarecrows back a bit further from the pond. last night i moved one of the scarecrows right to the spot I saw the heron flying up from, and it had not returned this morning, although I did see it at the upper gully pond.

I have decided to let the upper gully pond be a fishing ground for the bird as much as possible. The bird will need to have someplace to hunt, and if the pressure is too extreme it may start to directly challenge the scarecrows rather than avoid  them. It is unreasonable to expect the heron to leave forever, and guiding it away from a more valuable area to another place is always going to be more effective in the long term than simply trying to deny access altogether.

It is possible to set  up complete exclusion zones,  but one of the goals should also be to balance energy with payoff.

I know that my goldfish pond is out of balance, and I have been willing to sacrifice some energy through the summer to creating and moving scarecrows around. But I’m not willing to extend that energy to the other ponds, and with luck the heron may decide that looking for catfish is easier than taking a chance looking for goldfish.

Walking back from the fish pond in the rain, I had this new sense of well being, and not just because of the relief from drought and hot temperatures.  Of course this time of year there is always the possibility of monsoons, or hurricanes dropping large amounts of water all at once, but today I documented the rise of about two feet in the level of the fish pond.

This was not due to rain, but because of a decision to start the waterfall by draining the remainder of water behind the Low Gully Dam. I could have done this sooner, but decided to hold onto the water there until I felt fairly sure we had turned the corner on water supply to the garden. Because of the steady rain, I felt safe enough in the garden requirements and the filling cistern to go ahead and release the impounded water.

Although they don’t say much, I’m sure the goldfish are quite grateful for the extra oxygenated water being continuously fed into their pond  down below, which, because of the other dams recently constructed, has been receiving less water than before during the rains. But even with the rains, in years past, this time of year still sees that pond 3-4 feet below the high water mark.  So my feeling of well being was really due to the ability to release on demand water for the fish pond.  In future, the simple turning of a valve can save a pond full of fish if there is an extended dry spell.

P.A. Yeoman would say that ponds on a farm should be empty at the start of the rainy season, and it was tantamount to greed to try and hold onto that water when it could/should be sent to fields or places that might be able to use some extra. Also of course, that way the ponds can be cleaned, dams inspected and repaired, and generally made ready to hold their full capacity when the rains start all over again. In this case the water went to the fish, not gardens, but in future the High Gully Dam will likely have some excess water for gardens during the dry season.

Harvey, the hurricane, just dropped several feet of water down in Huston, and even the best prepared water design systems might be overwhelmed by that sort of exceptional stress, although a really good design still allows a way out when everything else is full to overflowing.  In this case, there was the fear that aqueducts might break under the flood, causing even more damage to those in the valley below.

This can be a reminder that there is always the possibility of extremes even the best planners can’t foresee. While larger dams may be without secondary outlets, swales can take water away from the valley/gully where one would expect the worst accumulations of water, and as it spills over the swale at an intentional low spot on the swale, the water must find a new path back to the gully and more and more of it’s destructive erosive force can be lessened. At each dam the water is stopped and taken again and again out of the valley to the areas that normally would get less water and need it most.

While large well engineered dams can be magnificent, more,smaller dams can do a better job at the task of stop, spread, and soak. With fresh water becoming scarce, anything that can keep more of that fresh water from running out to sea is a welcome detour.

As trees disappear and the normal water cycle becomes interrupted, small dams and swales are recognized as the answer to these sudden events, and properly implemented, the swales (which are a tree growing system) can even help lead the landscape into a more naturally balanced water cycle with bands of trees on contour controlling the flood.

So while my swales are not yet fully developed, and my dams are still somewhat at the mercy of the rain, at least they are stopping most of the water that used to run directly to the creek and off the property. And this year enough of that water remained to substantially raise the water level in the fish pond when it otherwise might be stagnant.

As the ground becomes better hydrated each year I would expect to have more and more water, until there is a natural subterranean flow that automatically keeps all the ponds full, and all the swales growing trees.

It is easy to speculate how far hydration may take a basically dry landscape, but it is enough for me to feel good by being able to turn a valve and fill a pond with water that might have been long gone many months ago.

So the first part was the fish letting me know something was wrong, the second part was observing the heron, and the third part is watching the heron react and avoid the scarecrow. I have been in the situation 3 or 4 times where I have seen Mr/Mrs heron several times around the dam just above the fishpond, one time I watched it fly in like it might have been coming to land at the fish pond, saw the dummy at the last moment  and aborted the landing gliding over the higher dam wall and landing at the far end. Trees and such around that gully corridor would have made it difficult to keep flying. 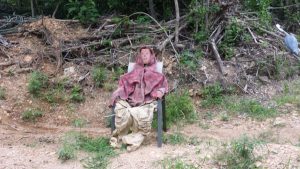 last night I came down just in time to see it in a corner just below the higher dam  but well back from the fish pond and away from the dummy, as if it had come in and then looked over to see the dummy (I keep moving it) at the very last minute and couldn’t clear the dam.

Or else it is getting braver and landing closer each time.This new dummy oversees everything from the Low Gully Dam–I’m thinking about red reflectors for eyes. The problem with having so many dummies around is that they start to develop a community of their own, and psychologically I may feel overwhelmed.

Anyway, the heron wasn’t there this morning and I’ll go down once or twice more before I leave for a few hrs, maybe I’ll get another sweat shirt and pair of pants out.

July 10th, Heron seemed gone from the lower ponds, but visiting the High Gully Pond I noticed it’s footprints in the shallows–maybe that’s why the catfish stopped such active feeding a couple days ago

July 13, 2017  to date the Heron has still not been back, although this morning I thought I saw some activity in a tree it may be using for a nest. Judging from the quick glance I caught of it flying, it seems to be giving my ponds a wide berth.

Even so, I fear the Heron is close enough that I may be looking over my shoulder all summer. Especially if that tree is a nesting site and it has hungry mouths to feed. Last year I remember seeing a juvenile at one point, so my long term strategy once the ponds are substantial enough to support more fish might be better served by simply allowing the heron free access to manage the fish once their populations are well established.