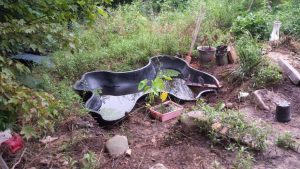 At the top of the kitchen garden, this new pond is a salvage that I had to repair using plastic welding techniques.  I tried to create a clay based pond 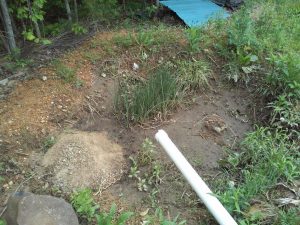 in this place, but all last year it filled many times and never held water very long, even with lots of clay added to try and seal it. In general, I would never spend money on a Plastic prefabs, but when the price is low and I can repair it, the energy audit becomes much better! I’m also finding that for smaller ponds a liner of some sort is probably going to be the only way to go. 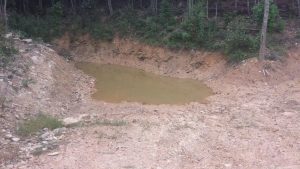 Due to bad weather at the time of creation I was unable to finish  building this dam with the rented backhoe, 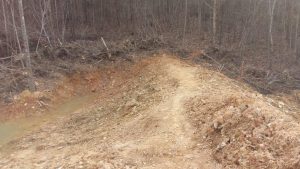 The water actually started to fill the pond from the bottom, and that water came in as a blue green color, 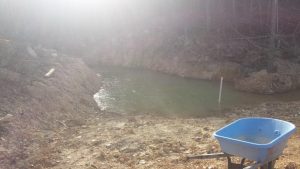 but run off filled it most of the way, and that water was heavy with sediment 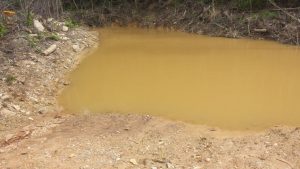 then it took weeks of hand labor to get it the rest of the way to this height. 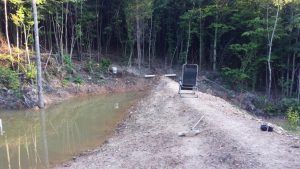 It  overflowed during excessive Spring rain events. but drastically receded during the summer last year because of irrigation water use and being emptied to keep the goldfish pond  filled. The dam  holds water very well and I’m waiting to see if the summer gets dry enough to bring down the water level so I can move in the backhoe and complete the construction.

I’ve already started to build up the first part of the dam wall, but it’s tough to compact clay right at the water line 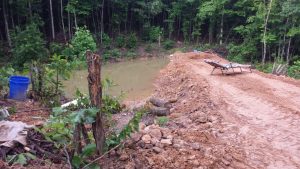 In another month, if the water is not down, I will drain it and then finish building the dam. (it’s great  to swim in at this level) Once completed I plan to stock it with Koi. 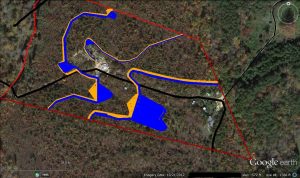 This is an overview of the  half of the property(red boundary). Difference in elevation is about 100′ from lower right to upper left and the two ponds  at the bottom of the picture are all in the same gully that runs downhill from right to left. The small pond pictured just above those two 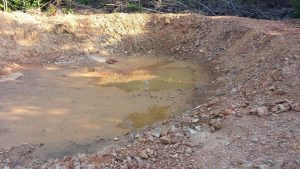 has never really held water yet, but it does show signs of improving it’s water retention.   This may change over time with organic matter and better integration of the swale, but that requires completion of   the Low Gully Dam.

At the very top of the plan drawing the pond touches a neighbors property and there needs to be some sort of written agreement to establish clear rights and responsibilities regarding it’s construction, use, and maintenance before beginning construction. At present the long connecting swale ends just before the pond location, and if no arrangement is reached that swale will be extended  up along the property line to collect more water that would otherwise flow off the property.

This picture was taken  at a very low water level, and believe it or not there are 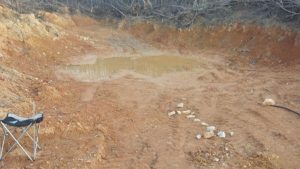 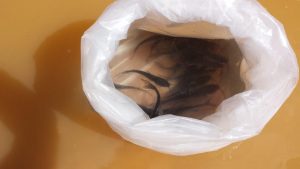 that survived the winter at this water level (only a couple feet deep). This year they are  over a foot long!

This “high gully dam” is in it’s second year. It overflowed once, 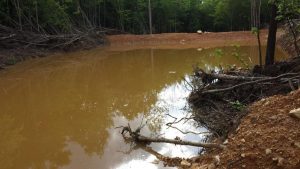 filled two or three times, but is still filling the “back country”. Dams are meant to hydrate the landscape, and the process generally takes about seven years. Currently this dam is the focus of most backhoe energy, 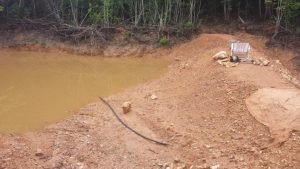 while it may not be obvious in the picture, the dam has been holding back the flood with a wall thickness of only 2 feet or less at the top 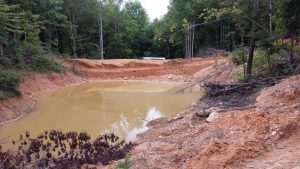 but as this picture  shows, the added mass will more than double the width of the dam wall, and the actual compaction will also be much better. 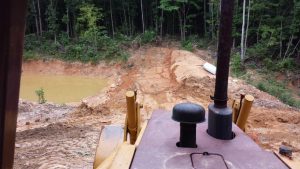 and a great deal of mass has been added to the dam wall, as well as clearing much more of the area to the left  and top of the picture  to prepare for further excavation. 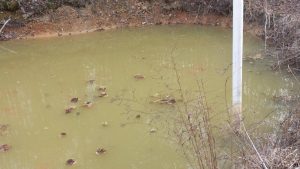 Goldfish pond (not shown on plan), a bit murky after a rain 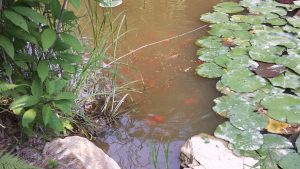 A close in snapshot of the gold fish pond. This was created when the driveway was put in about 15 years ago, and has boasted hundreds of fish, all descended from a few 38 cent babies from Walmart. There have also been crayfish, herons, and one huge snapping turtle that have all visited the pond at different points. Needless to say I try to discourage the heron(s) and snapping turtles with varying degrees of success.

Last year the fish in this pond suffered with dry weather throught the fall and winter, and the fish population was cut in half. Some of my favorite older fish disappeared and many smaller ones as well. But this year they are making a comeback and water levels are doing pretty good, so with luck they will continue to increase populations again.

It can be intoxicating watching u tube videos on Thorium and molten salt reactors. Not enough so I want to dedicate my life to it, but certainly enough to binge watch and change my general attitude toward ALL nuclear energy.

Of course the whole molten salt reactor story seems to reinforce my general theory about government being the best friend of big business, and unable to see beyond the profit motives of powerful corporations/individuals. So it generally appeals to my long standing distrust of all big government, both Republican and Democrat, and as such fits nicely into my world view paradigm.

Of course many of the molten salt researchers and advocates fit very nicely into the 9-5, big business establishment, except  that they have stumbled onto one of those world changing discoveries that could actually remake civilization more toward that Star Trek world of the future where people have all their basic needs supplied for free and no one works for money but simply as a contribution to the common general well being, according to their  personal desires.

So  some of the “advantages ” of a molten salt reactor aren’t really advantages to a person who understands Permaculture, and there still needs to be some training in simple things like water and soil conservation, as well as better agriculture techniques to reduce energy inputs.

So  Permaculture principles do not disappear simply because of cheap abundant energy sources that do not pollute or cause climate change.

Bill was pretty emphatic that Permaculture needed to permeate all realms, micro and macro, and the swales and ponds I dig on my land are just as important as the molten salt reactors reducing CO2 output and consuming nuclear waste.

That’s right, consuming nuclear waste. Did you hear me?

I said Consuming all those spent fuel rods and misc items of nuclear crap trying to find a home, and turning them into electricity, or heat to melt steel, all with limited extra energy inputs, and amazing energy outputs from the process.

Without doing actual computations, it appears that these reactors would actually solve many other waste problems from man’s current activities and supply unlimited sources of energy going forward into the future. And the reality is that Our use of the thorium would simply be a more targeted application with very small quantities (relatively speaking ) of this same element that has been protecting and sustaining life on the planet.

Don’t get me wrong, I’m looking forward to the day when we lay down all our tools, stop work and simply walk around in the garden  as supreme co creators , but I also see the hypocrisy of anti nuke enthusiasts benefiting from coal and fossil energy and unwilling to support something that promises to be even less toxic than solar panels.

If I thought solar and wind could scale fast enough to meet all electrical needs I would still want to know what you plan to do with all that nuclear waste.

Where’s elon musk when you need him , he might have an idea:-)